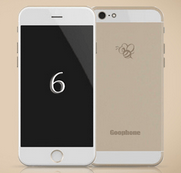 GooPhone i6 – The iPhone 6 Counterfeit Clone.

I recently bought a gooPhone i6 which for those that do not know, is an iPhone 6 hardware clone, running on Android and skinned to look like iOS. I have also recently bought an android budget smart watch – the uWatch 8. The watch was supposed to work with iOS, but the features I actually wanted were missing iOS compatibility. I now have an Android phone with an Android watch and absolutely no desire to use either one.

I am an Apple fan – My computers are all Macs. My phones all iPhones, My tablets are all iPads. My network is running on an Apple Time Capsule (which I also use as a NAS) and Airport Express. My TV is running on a Mac Mini and Apple TV. My music comes from an iPod. Hell, my favourite thing to watch is ‘Mac Break Weekly’ from the TWiT network. I have Apple and iPhone branded pillows on my couch! My fireplace was customized and is also running on a Mac Mini. My fridge has an iPad to display the kids artwork. There is more, but I believe you get the point.

It is paradise, or pathetic, depending on your point of view I suppose. For those that are obsessed with technology, there is almost a religious/political divide amongst the Apple, Microsoft and Linux/Android fans. Hard-core fans from any camp are quick to dismiss the strengths of the competitors and bask in the tunnel vision of their own camp. I am not saying I am any better, I’m just stating a fact – many tech fans have chosen a ‘team’ and are sticking with it (yay team Apple!). This is nothing new mind you, years ago I fought alongside the Super Nintendo team against the evil Sega Genesis crowd. Nor can I forget the epic battles I have waged pitting Pepsi against Coca-Cola. Spoiler: Pepsi rules. It is not strictly product related either – as a Pittsburgh Penguins fan in the 80’s I had plenty of arguments with my ardent Montreal Canadians supporting friends. Friends may be a strong word.

I have used plenty of computing systems; Commodore OS, Windows, Linux (Ubuntu and Red hat mostly) and Mac OS. I have drank plenty of Coca-Cola and even fell in love with the Phantasy Star series on the Genesis. However, there is 1 realm where my experience is less than complete – Mobile phones. Limiting this list to strictly smartphones I have used Blackberry, Windows Mobile and Windows Phone 8 and of course iOS. Notably missing is Android. Sure I have used Android, but not for more than a few minutes at a time here and there. Each time I do I lose my temper with it.

I detest Android – from its rip-off roots, to it’s cheap-ass hardware, to its unintuitive OS and it’s over promising of customization and under delivering unless you are rooting the phone. Besides, most of the time I am looking at an app, so having some weather widget on my phone draining my battery in the background that I can’t even see while I am browsing around in Facebook is not a feature – it’s the illusion of a feature.

The point of this post is not to rant on Android. Like what you like, ultimately it is irrelevant – the Sun will eventually go nova and destroy us all anyway.

So what is the point of this post? I want to review the aforementioned gooPhone, but I am having incredible difficulty doing so. So far I am less than impressed with the phone – but is that because the gooPhone is rubbish or is it because Android is rubbish, at least to me? I am having such difficulty wanting to review the phone – I pick it up for a minute or 2 and then put it down and go running back to my comfortable (and perfect) iPhone 6.

So many of my friends adore Android, in fact, most people I know love their Android phones – much like my iPhone adoration – their love of android is ‘real’ and jives with their personal philosophies. It is as though they were destined to love android, just as my makeup drew me naturally to the iPhone.

In order to fairly review the gooPhone, I need to separate the android from the goo. I need to become accustomed to using Android. I need to sleep with the enemy. I need to go behind enemy lines. I need to lose my religion (that was just a dream…). I need to sacrifice myself and be reborn – like a phoenix rising from Arizona! I need to… I need to… Jesus! I need to relax – I’m talking about playing with a different fucking cell phone, not undergoing a sex change!

I think I’d rather have the sex change, but no! I must do this, for the fan(s?). I need to take the time to use Android on a daily basis and give the gooPhone the review it deserves. My best time so far in using Android is approximately 15 minutes, Let’s see if I can beat that record!

So in a Knock-Off nerd first – the gooPhone review will be in fact a diary entry on my wild ride using the gooPhone as my daily driver. Wish me luck, and stay tuned to this post for updates on my gooey journey.

I’ll start tomorrow, that and quit smoking tomorrow too.

I have the MTK 6572, plastic backed gooPhone and I must admit, they did an amazing job replicating the design of Apple, but how about the Apple experience? Did they replicate that? Let’s find out based on my journal log entry:

– I put in my Sim card and loaded up the phone

– AVG found pre-loaded malware (surprise, surprise), which I then removed

– AVG once again found the malware had come back. Uninstalled it again…

– I then tried to download YouTube but it would not run until I updated the Google play services.

– Removed YouTube and updated the device, then put YouTube back on and moved it to the SD card

– Device will not charge, I tried it on, off, different cables, it just won’t charge and the battery drains FAST. This can be a deal breaker, especially if the damn thing can only be used once!

– Since the internal storage is plagued with bullshit apps I can’t remove, I Rooted the phone and removed the pre-bundled rubbish to give me more space (only100 Mb internal storage exists in total on the device, including the Android OS)

– Despite being root and turning on USB debugging, device disk will not mount on Mac or Windows

– Factory Reset phone, now I get an ‘iTunes connect’ popup that actually allows me to use the USB storage. Odd

– Installed Chrome, Zite and a few staple apps (no more than 8), as well as a wallpaper background.

– They worked for 5 minutes, then each time I tapped an app it said “app is not installed”

– Phone crashed and every app disappeared except for text messaging…

– I sent my wife a text, which worked – YAY I finally got to do something with this fucking thing!

– Battery at 13% and draining fast and still cannot charge !

– Found the APK file for the fucking store and tried to install it. Got a warning (I think) all in Chinese.

– Put Sim card back into my iPhone … and hugs it tightly as a single tear rolls down my cheek.

I have officially abandoned this project. Trying to get this junk to work has prooved to be more effort than it was worth. In addition to the hideous experience I had mentioned above, the device was slow as fuck and unstable even when it was working. I have since played with Android on its own and some (although very few) of the problems I had on the gooPhone were caused by Android, but the vast, vast majority of problems with this turd stem from the gooPhone on it’s own .Stay away from it unless you can get it for under $50. There is no support for it and you will regret it. Buy a cheap Android phone (HTC Desire series) instead, or better yet – Get a real iPhone.

What do you think? Have you tried it? Should I try this experiment again? Would you use it? Leave a comment and let the nerd army know!