iPhone Gun Case, or ‘How to get your dumb-ass shot for no reason’.

According to Fox News, America, or ‘Murica, if you prefer is under siege! ‘Thug Culture’ if permeating through our schools. Teenagers are listening to ‘Thug’ music and wearing ‘Thug’ clothes and this is leading our most vulnerable of generations to not only accepting ‘thug’ culture but admiring it as well. Poor Fox News, how they must really long for the days when they could use another word instead of ‘thug’ to describe the subset of people they are trying to describe. Luckily, as a left-leaning Canadian, I can sit back and laugh at them, however the ‘thug life’ image that they are showing does look cool. I wanna look cool and tough too. I tried wearing a Decepticon t-shirt but most people don’t get how bad-ass the Decepticons were and I wind up looking like a kid. I am going to need something else that shows off my street cred and ‘thug’ style. But what? I’m gangsta so… maybe a gun? Since we are not allowed to carry assault weapons to the grocery store here in Canada – which is a good thing because I would easily shoot any and all grapefruit I saw given the chance, I guess a gun is out of the question. Wait! That’s not gangsta. Gangsta would be to get what I want and damn the consequences or what the man has to say. After a little searching, I found the perfect thing that tells the world I’m not only Gangsta, but also an iPhone fan at the same time, and as a bonus – I can get it in pink! That’s dope, yo.

All Images of the gun are © from the eBay seller I bought this from. I would credit him, but as of last night he pulled all his gun case listings due to the backlash he and many others received from the media.

The ‘Gun Grip Case’ is an iPhone case, available in sizes for iPhone 5, 6 and 6 plus. It includes a trigger and when placed in your pocket or tucked into your pants, especially the black one, is designed to look like a real gun.

Clearly this is a great idea. Think of all the “Is that a gun in your pocket or…” jokes you can inspire before the police eventually beat your ass to the ground.

No news on where you can get the bullets for it, but if I know iPhones, then I would assume they are only compatible with specific bullets. One must wonder how such a product passed the initial stages of development. I can envision a board meeting at ‘China sweat shop co.’ where the team is brainstorming ideas…

“What about guns? People like to kill each other and pretend they are action stars in America. Maybe we could help confuse the police force so even more people needlessly die. Oh! Oh! I’ve got it, let’s make them in colours attractive to children so they too can take part in the fun!”

“Great idea Johnson! This is the best idea you’ve had since deciding that PlayDoh should smell like chocolate!”

“And let’s make it available only for iPhones!” 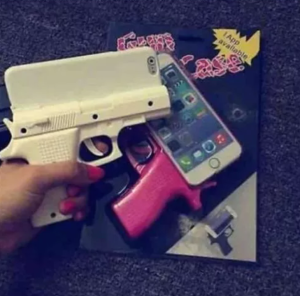 You want me to use Android? Not until you take the iPhone from my cold dead hands!

Knock-offs are an interesting business, sure they create a modern slave-labour workforce and undermine the intellectual property rights of those that designed the original but rarely do they get you killed. Well, ignoring the dangers of counterfeit iPods (where a faulty battery can burst into flames) or in a counterfeit Spiderman toilet toy (painted in highly toxic paint for junior to eat) and I am so embarrassed that I discussed the Thomas the Tank Engine Transformer toy, which I should have known would eventually break apart and become a choking hazard, and man oh man, most recently I discussed an iPhone dog chew toy which, as I described, resulted in a bloodbath. Ok, so maybe they all are deadly on some level. What was my point again? Ah, never mind, probably not important anyway.

Imagine walking into a bank with this case hidden away in your pocket. You walk by the security guard and smile politely and when it is your turn at the teller, you get a call on your phone…

“Oh, hi Shelia, I’m about to make a withdrawal at the bank and I’ll meet you at the party once I can pay my bail.”

Assuming you survive the impending gunshot from the security guard, you can at least be confident that when the phone falls to the ground that the glass will be protected. What a relief! It might get blood stained, but then as it is with most iPhone–related issues, it really is your fault for holding it wrong. In this case, holding it like a threat. Zing!

Unlike toy guns that are regulated and demand an orange tip be placed on the end to clearly identify them as toys, the gun case does not, since it is not technically considered a toy.

This is why we can’t have nice things…

The case is available in either a plastic body with a working trigger or in a rubber case, although unfortunately the rubber case does not have a functional trigger. Some versions (as there are now multiple rip-offs being sold of this product) include an app that completes the image of the gun and other companies include a Russian roulette app that makes for a great party trick. I’m not sure what kind of parties you attend, but if Russian roulette is a point of entertainment for you, then how miserably bad can this party be?

“There is a chance it will kill you, do you still want to play?”

“Dude, anything to get out of this party…”

Fuck man; bring over some girls and play spin the bottle or something.

There’s a case for that.

This is perhaps the dumbest idea that was ever made into a product, and that is saying something given the pile of abominations I generally review on this site. I am apparently not the only one saying this. While I was researching the item for this review, I found that this product has made the news lately, appearing in the New York times and other media outlets where police officers have made it clear that someone is going to get accidentally shot over this thing. One could argue that planning a deadly accident is actually conspiracy to murder, but in their defense, it would be hard to tell the real guns from the fake guns when one is pointed at you from a distance. Good luck waving this around in the air, trying to convince an officer that this is a fake. How well do you think this will end? 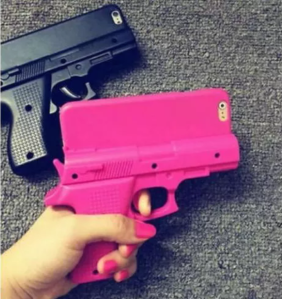 It will end the only way it can end… With a catch phrase and a bang!

In defense of the case, the company that produced this pile of shit are not the first to merge the world of gunplay and cellphones. The ‘Yellow Jacket’ company released a functional Taser iPhone case and there have been a few others that have released cases with concealed knives in them. Of course since many places allow you to walk around with a real gun, how much worse is it to walk around with a fake gun case? Other than the fact that you keep pulling it out every 10 minutes to check your Twitter feed. Revealing it to the public over and over. Then again, there is a part of me that thinks you should be shot for checking Twitter that often anyway… So I guess it all works out.

Please! A black gun case with a white phone? Come on people get your shit together.

So… as I wait for mine to arrive, let’s listen to some testimonials from people who have used the case.

“Yo, I was walking with my homies to the convince store when I got a call from my girl. I picked up the phone and before I could put it to my head I hear the siren and see the lights and before I know it, damn policeman has me in cuffs and is taking me downtown. I fought it, but then they starting hitting me with a nightstick and tasing me. I begged them to stop but they kept calling me a ‘thug’ and zapped me more. Damn policeman found a joint in my pocket and now I’m in jail for 10 months. Fuck you iPhone case!” – Anonymous D. East Harlem, New York

“My son was playing with his iPhone case outside and the neighbours called the police when they saw him with what they thought was a real gun. Over $3,000 in court fees and appeals and my son is still stuck with child protective services. I wish I had never bought the damn thing!” – Ma B. Chicago, IL

“I was very disappointed in this product as when I bought it, I didn’t notice that it was an iPhone case. Now I’m going to look like an idiot when I start pointing this out the window of the school book depository building.” – Lee O. Dallas, Texas 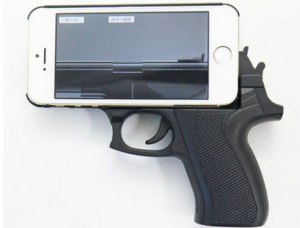 Ok, maybe this is not too encouraging, but I’m a gangsta and I am going to hang out with the wrong crowd and maybe even smoke a cigarette and use a swear word. Me and my posse are going to walk around the school, intimidating the fools that get in our way. The next time the teacher wants me to read something in class, I’m gonna pull out my gun case and tell her that she can read it herself! Ah man, the class and my crew are gonna freak out! I am going to be so cool, I can’t wait! Reading is for suckers anyway.

On second thought, maybe I’ll just get one of those spin the bottle cases instead.

In all seriousness, regardless of how you may feel towards the police, gun culture or iPhones – I assume nobody reading this wants anyone to get hurt, especially kids. As kitsch as this thing is, don’t buy it. It will end in tragedy. Real guns also come in pink and white now, so police officers will have a hard time distinguishing the real from a fake regardless of the colours you choose.
What do you think? Does this gun case deserve all the hate that the media and myself threw at it or is it harmless and we all need to relax? Leave a comment and let the nerd army know! Don’t forget to like, share and subscribe and let the word of the nerd be heard!