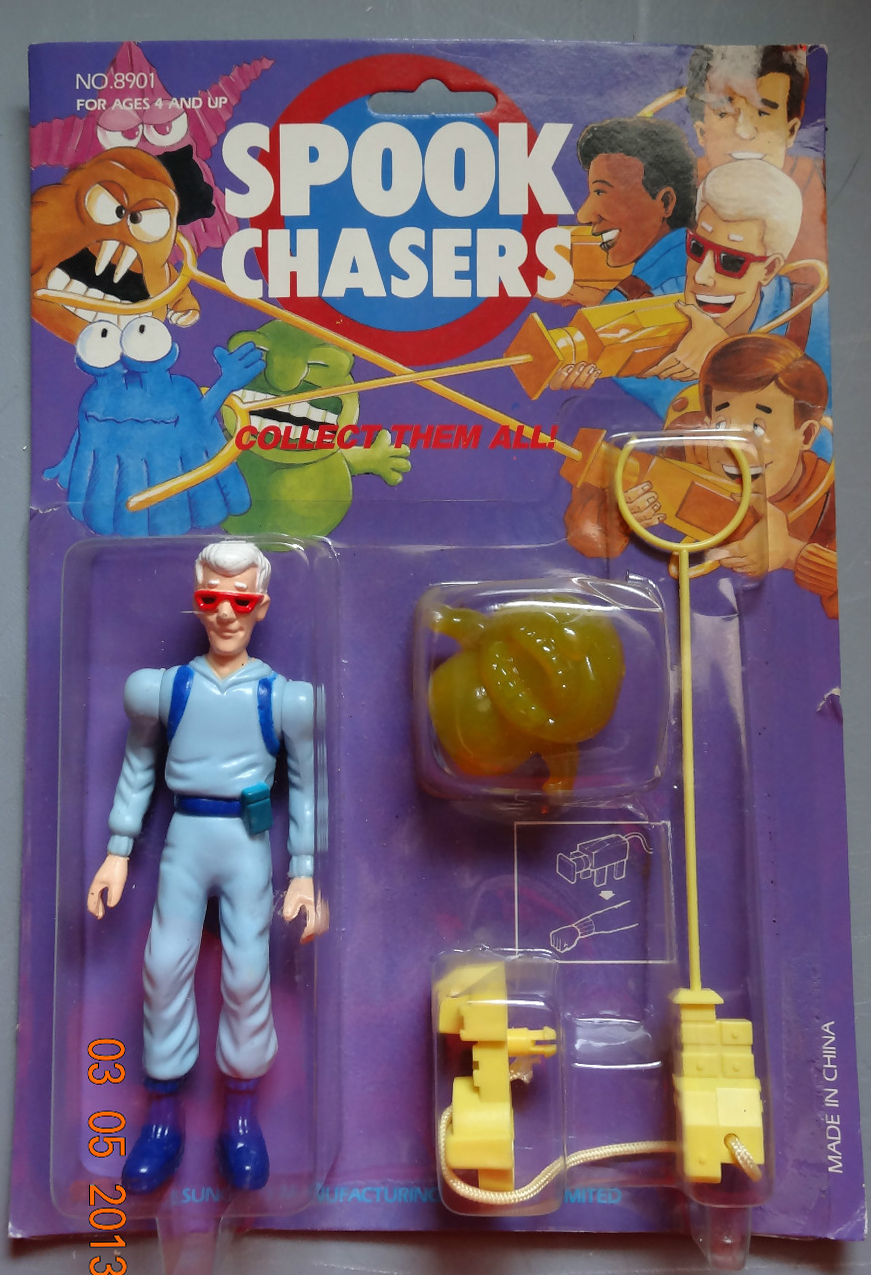 You know it’s going to be a great day when you wake up with the theme to Ghostbusters playing on loop in your head. Regardless of how many years pass, this song is flawless, perfect in every single possible way. Ghostbusters was an integral part of my childhood and I still randomly wake up with that epic anthem playing loud and clear in my mind. Every now and then the theme from Bubble Bobble on the NES takes its place, but I can’t imagine ever hating that song either. If you are even remotely in the same age range as I am, you know the song, and I am sure you love it.

“If there’s something strange / in your neighborhood / Who ya gonna call?/ Spook Chasers!” 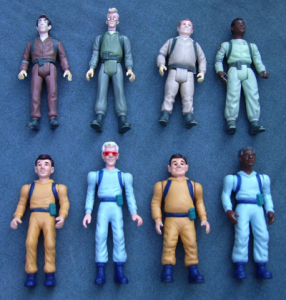 The good, the bad and, well the bad is also ugly.

The Spook Chasers is a line of knock-offs of the Real Ghostbusters Action figures made by Sungold at the time when the Ghostbusters were the hottest toy to have.I shouldn’t be surprised that the knock-off market would have taken something as sacred as Ghostbusters and butcher it, but then again, one could argue that the official Kenner toys and cartoon were pretty pale imitations of the original material as well. 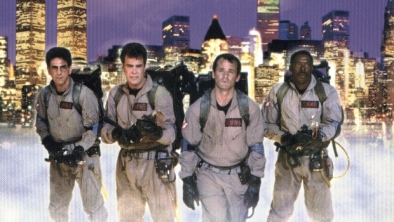 Not sure what people are complaining about. They look the same to me.

For the record, we are not talking about the ‘Extreme Ghostbusters’ cartoon here. Granted it did have some things that made it worthwhile : Egon did make appearances in this rendition, plus the goth chick was hot.

Hey guys, We’re diverse! Make sure you notice that.

Of course, we all had that idiot friend that argued that the Real Ghostbusters’ cartoon was a rip off of the Filmation Ghostbusters cartoon with the fucking gorilla in it. Which seems to have been inspired by the 1975 TV series “The Ghostbusters”

Look at that ape with the stupid hat. Who wears goggles on a hat?

Ok, I am way off track here. At any rate, let’s take a look at this, let’s call it an ‘homage’, toyline.

“If there’s something weird / and it don’t look good / your mother probably bought / Spook Chasers!” 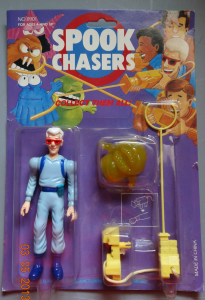 What in hell is going on with his face? Space Egon from the future has cut his hair, finished touring with a Devo tribute band and now has dollar-store Geordi La Forge glasses which help him see ghosts at night. White Hair? Sunglasses at night? It reminds me of that song… “Love shack”… I hated that song. Why does he have these glasses? I don’t know. Maybe he looked directly into the trap one too many times, or perhaps he is hiding from Janine’s advances and is trying to pull a Clark Kent to do so.

Nope. Must be the trap thinggy instead.

Egon comes with what I can only hope is a ghost, as well as a proton pack / lasso. The blaster connects to his claw-like hand in much the same way as the Kenner original, but rather than have a cool beam that comes out of it, you get a wile e coyote contraption that apparently can heard ghosts like cattle. How creative.

If you’re hearing things / like your friends laughing / you must be playing with / Spook chasers!

By the way Egon, are you and Ray crossing the streams?

Winston: Hey guys, can I have a blaster too?

I do believe you warned us, and I quote: “Don’t Cross the Streams” […] “Try to imagine all life as you know it stopping instantaneously and every molecule in your body exploding at the speed of light.” In the director’s cut it also adds “… and being replaced with a unholy, chemically unbalanced troglodyte horror-clone of yourself.”

Well that explains it then. 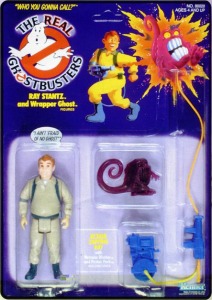 Ray has put on a little weight since the last time I saw him. Damn dude, lay off the cupcakes already. Wait, let me guess, “You couldn’t help it. It just popped in there.”

Look at this monstrosity – The flat head, the triple chin, his permanently perplexed looking eyebrows hovering over his big gingerbread man like eyes like angels… or spooks if you prefer. The guy looks like a bumbling oaf husband from some rushed pilot of a shitty sitcom. What the fuck happened here? Who or what thought that this looked like Ray!?

A poorly painted toy / laced with lead / how’d I get this rash? / Spook Chasers!

There are also some variations on the toys as they were all packaged with randomly coloured ghosts. 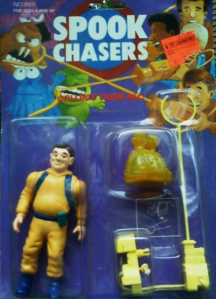 Here is Ray with a yellow Ghost. Meh. Still sucks.

Let’s take a look at Peter. 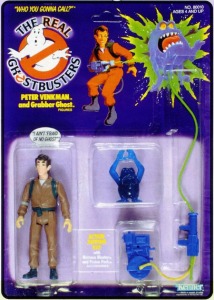 Ah yes, Peter. The star of the show and one of the all-time great characters in movie history. So how did the knock-off market capture such a legend?

Wow, that face just screams ‘mister personality’ doesn’t it? Apparently, judging by the toy molds used to create them, Peter and Ray were brothers. This fact must have been in a different directors cut, made shortly before the director released his final cut, which was on his own wrists I assume.

Of all the characters to fuck up, why did it have to be Peter? Can’t you just make a 4th Ghostbuster and ruin him instead?

How many times do I have to tell you I AM NOT WINSTON!

Clearly forged by barbarians with no concept of how the human body functions, Peter and the rest of the “Spook Chasers” offer no leg articulation. We can move their arms, (in either their “I am standing straight” pose or in their “I am a zombie” pose) but we can’t even move their legs a little bit? Not one single point of articulation, these legs are useless. We can’t even move them enough to pretend the character had a muscle spasm. Who the hell wants a broken toy like this?

They never made an Ecto-1 knock off for this particular toy line, so I guess the toy makers didn’t have to worry about having to ensure the figures could sit down, and it is probably best that they didn’t make one anyway. I can only imagine what a savage pile of dung that would have been…

You have no idea how much of an erection I have right now looking at this.

If ya all alone / and broke as hell / whatcha gonna get? / Spook Chasers!

Who’s next? Ah yes, Winston. How could we forget about you? Sure the movie and merchandising tried to at every turn, but as we say here in Quebec “Je me souviens”, which roughly translates to “Oh yea, that guy!”

What did they do to ya buddy? This is unforgivable – He’s a fucking raisin!

Was it an active decision to age Winston like a bottle of wine (which *spoiler alert* has since turned to vinegar)? Do people really dislike Winston that much? It is one thing to ignore him, but it is another thing to bring upon him such levels of humiliation. Is he even able-bodied enough to lift a Proton pack, let alone run around New York busting ghosts? I assume the other guys leave him at the fire station where he sits on the front stoop ensuring that teenagers don’t get too close. This is just sad.

Can you believe what they did to him?

Winston: “If there’s a steady paycheck in it, I’ll believe anything you say.”

He looks like he’s been Obama-ed! Once a young, proud, energetic man, who has been exposed to some kind of Star-Trek plot where everyone ages decades in a matter of days and now spends his time looking for oatmeal, pudding and other mush he can eat without having to chew. Are we sure this is not some Obama toy? There must have been some mix up, yea that’s it!

I would assume that it took more money and effort to deform Winston into this feeble shell of a man that it would have to simply take Ray’s head and paint it black. Sure it would have been racist as hell to do that, but still… Look at him!

“I’ve seen shit that will turn you white!”

When I opened it up / Christmas wasn’t fun no more / I think I’d rather play / Thundercats!

Ok, I can’t take this anymore. This rendition of the Ghost Busters is worse than the freeking trailer for the modern Jem and the Holograms movie. I need something to cleanse my palette.

I don’t feel all that cleansed. But I am not complaining.

Verdict: Are they really that bad? They have the proton pack and overall they somewhat resemble the original Kenner toys yet surprisngly, the knock-off versions are worth more money than the originals. I would love to have these in my collection, but then again, I have questionable taste.