In the last exciting episode of the ‘moderately-remarkable Spider-man’, Doc. Oc decided to end his feud with our hero by inviting Spider-man to a comfortable brunch at his place. Spider-man agreed to the meeting, for if there was a way to bring peace to the world, he surely had no choice but to take the chance that it could be true. Little did he know that the Doc had filled the food with an illegal amount of laxatives.

“Yes, Spider-man , It’s true. I’ve changed my ways! No longer do I want this endless fight, I want tranquility. Would you like some more prune juice?”

“That’s good to hear Doc, and don’t mind if I do. Can you also pass me the beans and cabbage?”

And now, the exciting conclusion….

This is an interesting find – a Spider man ‘Toilet Shaking Toy’. To be clear, Spidey is not shaking a toilet, well at least not directly anyway, but rather is bobbing his head back and forth to some unheard rhythm. We can only presume that he is moving his head to the rhythm of his feces moving through his large intestine. A classy toy, for a classy home.

Let’s take a look at the packaging – We have Superman racing towards something. More than likely a toilet, in keeping with the sophisticated theme of the toy. According to the packaging, the Spidey-Toilet is ‘Battery-less’ and Solar Battery powered. This seems somewhat of a contradiction, I mean, clearly it HAS a battery of sorts inside, either solar or not. So do I need to buy batteries? In an effort to reduce the confusion, the packaging additionally states “Batteries are not required as it works battery.” Gee, thanks… That cleared that up. It turns out, as you may have suspected, that this is in fact solar powered, however it cannot be kept in direct sunlight. What good is a solar battery if we cannot expose it to sunlight? I haven’t even opened this rot yet and I’m already annoyed with it. The package also suggests we do not get it wet, and we can further assume, we are not allowed to feed it after midnight either.

And remember kids, to read all warnings on packages: “In order not course the danger of asphyxial, please do no to put the spare parts into the mouth”.

I think that means it’s safe to eat. I’m not sure.

Look at this thing. What else can I say that the toy itself doesn’t say? It’s spider man sitting on a toilet. 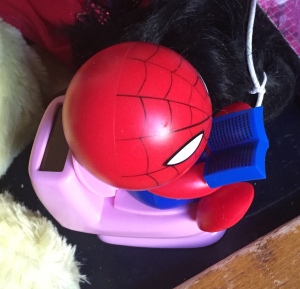 Originally, he came with a book, which I have since lost, that he could read while he was … you know… pooping. The book didn’t have a title to it so we are free to use our imagination. What would Spider-man read while sitting on a toilet? Do you think he would be reading a comic book? If so, do you think he is a DC or Marvel kind of guy? Maybe he is reading a fantasy epic ‘swords and dragons’ type adventure. Maybe a technical manual? Perhaps he is trashing it up and indulging in some scandal rag that claims Elvis and Princess Diana were abducted by aliens, returned years after and are now alive and well on a small island in the south pacific. Do you think Kurt Cobain is there too? God, I’d love to meet him. Maybe Spidey is reading pornography, who knows. Whatever he was reading, the book is gone now and he is forced to sit patiently staring at the wall while he does his business.

I wonder if this is his home toilet or is this a random toilet he is using at the office? The pink is an odd choice; maybe he is at Mary Jane’s? I hope for his sake, it’s a home toilet – I hate those public ones, listening to the grunts, struggles and cries of desperation coming from the stalls. I especially hate it when someone fowls up the place while you are using the urinal, they leave in a hurry and your standing there washing your hands, while a new person walks in, takes a breath and looks at you like the almost visible stench is somehow your fault. “It’s not me! I swear! It was the 1-armed man! And he didn’t wash his hand!” Fuck public bathrooms. But I digress…

Do you think Peter dresses up in his Spider-man costume normally to do this or is this just an emergency situation?

Peter: “Sorry babe, can you hold that thought? I need to dump super-bad.“

Peter (shouting from the washroom): ”Did you see my red gloves? I can’t do this without them!”

MJ: “I wonder if Batman is still single?”

Surprisingly, the build quality of this toy is actually reasonable – Not $6 reasonable, which is what I paid, mind you, but still a decent build quality. The plastic is solid, the toy works as advertised and it actually holds the charge for quite a long time. Additionally, Spidey is in a ‘chibi’ (super deformed) style, which adds some charm to an otherwise embarrassing toy. Thankfully the manufacturer stopped short of adding a sound effects button. Keep it classy, bitches!

Spidey sits patiently, nodding his head back and forth while waiting for the inevitable. That’s all it does. It is far from as offensive as it could have been and I applaud the restraint. By doing so, the product becomes, kitsch, and fun. It is even adorable. Well as adorable as a grown man in a Spider-man costume defecating can be.

What do you think? Is it cute or ugly? Would you display this on a mantle or shelf in your home? Leave a comment and let the nerd army know! Don’t forget to like, share and subscribe and let the word of the nerd be heard!