“One day… an Autobot shall rise from our ranks… and use the power of the Matrix… to light… our darkest hour.” The dying words of Optimus Prime from Transformers the Movie, perhaps the only scene in any movie that ever made me cry. We assume it was Rodimus (nee Hot Rod) he was talking about, but perhaps it was another… thing that when infused with the Power of the Matrix would lead the Autobots to victory.

According to my fan-fiction nightmares, and the delusional fever dream of a Chinese heroin addict, this light in the darkness was none other than Thomas the tank Engine. We assume that while travelling around the island of Sodor, Thomas, Percy and James struck upon the ejected Matrix and when infused with the power, merged into the mighty warrior ‘Thom-a-stator’.

Oh boy, what the hell is this? As a huge Transformer fan, I am both aroused and confused by what I have seen. Someone was presumably watching an episode of Thomas the tank engine and friends (we can only assume it was against his will) and thought that it was lacking an edge. After … seconds of brainstorming, his eureka moment arrived – “What if Thomas and his friends merged into a super robot like Devastator?” It is insane… It’s obscene… it’s … it’s actually kind of cool. When I was a kid I turned everything I could into a Transformer. Is it possible that the creator of this shared my love, nay insanity for Transformers?

Let’s start with the packaging – Brilliantly simple, but much larger than the images on the Internet would lead us to believe. The front has images of random trains on fire (likely the result of an air strike from Cyclonus and his armada) all sporting that ever-terrifying Thomas-brand face. The beautiful sheep grazing near an impossibly small windmill and unholy large train is a nice touch. It really sets the tone of ‘killer gestalt train nightmare’, don’t you think? 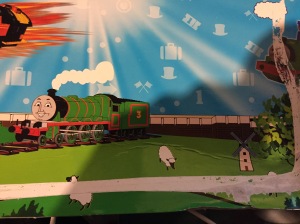 Additionally, we see a terrified human slave that has been melded into the hull of our titular hero. Or at least I assume that is what it is. Whatever it is, the figure is not included, and it is surely terrified.

The back of the box repeats much of the front artwork as well as a product shot. However the best piece of art from my opinion is the stock train image that has been plastered with a cartoon demon face. Is it just me or are those Thomas faces freaky as hell? 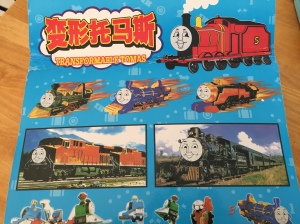 Moving on to the product itself, we see it comes with 3 trains (blue, red and green), a caboose piece for each train and a VCD (which contains a few standard Thomas episodes in Chinese. Not ‘Thom-a-stator’ related, sadly). The build quality is impossibly poor. This is the worst plastic I have ever held – it smells bad, it almost bends under average holding and is poorly constructed in the worst ways possible, almost guaranteeing it will break. 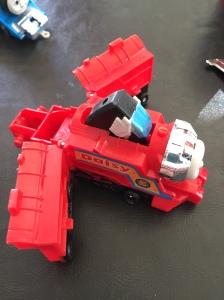 Everything that is supposed to be solid is flimsy, including the hinges and connecting plastics. Everything that is supposed to move or bend is stupidly tight. I had to use a fork to force some of the pieces to bend (that were supposed to bend in order to transform). So what we are left with is a flimsy shell that houses super tight moving parts. In the end, transforming him will inevitably result in a piece breaking. This is the worst build quality I have ever seen, and it is surprising (kind of) because the toy doesn’t really look that cheap. The Chrome highlight on the front and overall style of the fully-merged Thomas rivals some of my legitimate Transformer toys, but don’t let it fool you – this is a display piece only – if you play with it, it will break.

Unfortunately when Thomas and his friends merged with the Matrix and became Thom-a-stator, James had his spark corrupted. According to the sticker on him, his name is actually Daisy. So not only is he having gender-identity issues, but look at those eyes, how menacing is that? I can only assume that when Megatron engages Thom-a-stator, it is not fear or doubt Megs is feeling, it is more pity for the obvious generations of inbreeding that created this thing. The pity would likely last a second or two and then Bang! That’s the end of Thom-a-stator…

The paint job is fantastic don’t you think? It’s as though a factory worker just threw paint at some random plastic and Thom-a-stator was born. 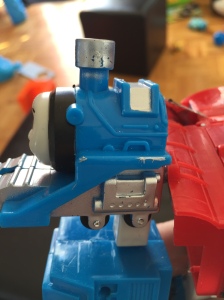 Transforming him is a real test of patience, with the delicate plastic and poorly connecting parts, it is a miracle that this thing transforms. In Thom-a-stator mode, he is actually pretty cool looking, albeit not all that poseable – his arms, fists, legs and knees move, but not his head or elbows. While we are on the subject of those fists, is it me or are they on backwards?

No, turning them around doesn’t work, since the plastic jets out too far and no, switching the blue and green arms around doesn’t help either. The hands are simply on wrong. That being said, at least his legs are solid and he stands up very easily and without any additional support. Unlike many of the classic transformers (some exceptions – I’m looking at you Starscream) the trains are not all 1 piece that twists and turns to transform, oh no – You are expected to rip the fucking thing apart and re-assemble it in the mode you want (Train or Thom-a-stator). The robot head looks like a mix between Optimus Prime and Wolfang (Beast Wars) but it is hard to notice anything other than the googly, cookie-monster-esque eyes jutting out of his fucking chest like Kuato from Total Recall.

He is approximately the same size as Devastator and approximately 0.0014% as intimidating as Predaking. What else can I say, this is the most bizarre Transformer rip-off I have had the pleasure of owning and certainly the most unique.

By the way – why the hell isn’t Thomas the centrepiece? I thought he was the ‘leader’,

Verdict: Recommended for Transformers and/or Thomas fans as a fun novelty objet d’art, but if you play with it you will go blind, er, it will break. Guaranteed.

What do you think? Would any child actually want this thing or is Thomas better off without the new Devastator form? Leave a comment and let the nerd army know!